The museum complex is spread over a vast area with two buildings. You will get a chance to see a collection of rare and legendary steam trains, locomotives, electric locomotives, railcars, and other rolling stock. This is a perfect place to visit before your trip to Vladivostok!
Leisure time / additional evening program
Optional:
the Spilled Blood Church
the Hermitage
the boat ride along rivers and canals
the Faberge museum
Day 3
St. Petersburg - Moscow
Breakfast in the hotel
Check Out.
Half-day trip to Peterhof
Peterhof park is signed as UNESCO World Heritage site for the unique fountain system. The "Russian Versailles" has many small museums and churches on the territory, such as the Palace of Farmers, Marly Palace, the Cottage Palace, Church Wing, The Museum of Collections, The Museum of Playing Cards.
Leisure time / additional evening program
Meeting at the hotel in the evening, transfer to the train station

Overnight train to Moscow
(On board the trains, Kupé 4-berth sleepers (2nd class) is the usual comfortable choice for most passengers)
Day 4
Moscow

Welcome to Moscow – a home to more than 150 museums, 200 theatres and world-famous cultural treasuries such as the Kremlin, Tretyakov Gallery, St. Basil Cathedral, Garage Museum of Contemporary Art and many more.
Arrival to Moscow.
Meeting with your guide.
Breakfast at a local restaurant
Metro Tour + Kremlin + Zaryadye observation point + GUM (walking tour)
Metro does not only function as public transportation, but a museum showcasing the history and beauty of Russia both past and present. Learn to navigate the Moscow Metro like a local!
Discover Kremlin, the home of the Russian government, a UNESCO World Natural and Cultural Heritage, explore one of the new symbols of Moscow- Zaryadye Park and visit Russia's most iconic department store – GUM.
Stay overnight in hotel

Optional: Back to the USSR tour (VDNH with Cosmos pavilion, Cosmonautics Museum), by metro.
VDNH stands for Exhibition of Achievements of the National Economy and is a place where you can feel both local spirit and enjoy Soviet historical architecture. You will find fountains, the brightest and most picturesque pavilions on the territory of VDNH. The huge exhibition space, which is dedicated to the domestic history of space exploration.

Learn the secrets of space! Models of satellites, original space suits, and the interior of part of the Mir space station – the Museum of Cosmonautics welcomes you to explore the history of Russia's astronomy heritage. Complete this day by getting around using metro. You are practically a local!
Meeting at the hotel in the evening
Transfer to the train station
Overnight train to Kazan

Day 6
Kazan
Welcome to the capital of the Republic of Tatarstan and the third capital of Russia! Kazan is one of the leaders of the Russian cities by the number of nationalities and various world religions represented. It played host to matches of the FIFA Confederations Cup, in 2018 the city was among 11 Russian cities hosting FIFA World Cup matches, and in 2019 the 45th WorldSkills Competition was held here.
Breakfast on the train
Arrival in Kazan
Meeting with your guide
City tour
Admire the city's top architectural landmarks and iconic sites. Experience a blend of Orthodox and Muslim world and uncover unique cultural highlights.
Transfer to the hotel. Check-in
Optional:

Visit one of the local houses and learn how to make Russian dumplings or pancakes under the supervision of the host.
Day 7
Kazan - Yekaterinburg
Breakfast on the train
Race track
Historically, equestrian sports and horse breeding are part of Tatar national culture. You will visit the Race track, one of the biggest in Europe, and the museum of horse breeding.

Optional: horse riding
Meeting with your guide
A tea party at the museum of Chak-Chak
Interactive museum dedicated to traditional Tatar food – sweet Chack – Chack. Learn how the various foods are made and sample teas and sweets.
Transfer to the train station
Overnight train to Yekaterinburg
Day 8
Yekaterinburg

Modern Yekaterinburg is fourth largest city in Russia, one of the major industrial centers, especially for heavy engineering, and a home city of Russian Federation's first President - Boris Yeltsin.
Afternoon arrival in Yekaterinburg. Meeting with your guide
City tour
Meeting with your guide
Transfer to the hotel
Stay overnight in hotel
Day 9
Yekaterinburg - Krasnoyarsk
Breakfast at the hotel
Free day to explore the city
Optional: Enjoy a tour of a sturgeon fish-farm with a caviar tasting and head over to the local brewery where you can try different sorts of beer.
Prehistoric survivors of the ice age, sturgeon are among the largest freshwater fish in the world and is one of the most valuable species inhabiting the rivers of Russia. Learn the history, the details about sturgeon and of course try caviar which was for centuries considered nothing more than cheap peasant food, served with porridge and eaten by the bowlful but once Ivan the Terrible got a taste for it, its status changed, and it has remained a delicacy since.
Experience a laid-back atmosphere at a local brewery, sample several varieties of craft brews, then tour the facility and learn about the history of the company.


Optional: Ural Gold mining tour
Russia is the largest country in terms of geographical area. As a result, it has some of the largest mineral reserves in the world. For many years, gold mining by individuals was illegal but recently the state has allowed people to try their luck at finding this most precious of metals.
Gold mining is deeply rooted in history of Russia and dates to the Middle Ages.
Learn about gold panning techniques, spend your time searching for gold and become a real gold miner!
Transfer to the train station.
Overnight train to Krasnoyarsk
Day 10
Day on the train
Day 11
Krasnoyarsk

Krasnoyarsk is one of the oldest Siberian cities and is a major industrial complex and one of the largest producers of aluminum in Russia.
Arrival in Krasnoyarsk. Meeting with a guide
Breakfast at one of the local restaurants
Visit the nature reserve "Stolby" (3 km on foot)
If you are interested in hiking or getting outdoors during your time on the Trans-Siberian, then Stolby is the right place! Fresh pure air, massive rocks, thick forest - the natural reserve is the rightful leader among all the tourist destinations of Krasnoyarsk and occupies the territory of 47.2 thousand ha of the right bank of the Yenisey.
Visit to a local artist in her studio
She will tell you about her artworks, trips to the north of Siberia and local art life. Enjoy tea party with homemade pancakes
Stay overnight in hotel
Day 12
Krasnoyarsk - Irkutsk
Breakfast at the hotel. Check-out
City tour with the visit to the observation place, you will see Krasnoyarsk Hydroelectric power station which is one of the biggest in the world.
Have fun at the "Bobrovy Log" park!
There are plenty of hikes, luges, and zip lines. The length of the zip line at the Bobrovy Log Fun Park is about 760 meters and the top speed is 88 kmph
Transfer to the railway station
Overnight train to Irkutsk
Day 13
Irkutsk and Baikal

Irkutsk with attractive embankments along the river and many surviving wooden houses on its tree-lined streets is an administrative and cultural center for Eastern Siberia and of the Russian Far East. The classical architecture dates back to the period of the 1880s when the city boomed after gold was discovered in the area. Irkutsk serves as a starting point in your journey to the Lake Baikal.
Arrival in Irkutsk . Meeting with a guide
Breakfast at a local restaurant
City tour
Transfer to lake Baikal
Free time for lunch
Optional: Baikal boat trip

Discover one of the most extraordinary attractions in Baikal, the Circum-Baikal Railway. During this trip you will get a chance to see the most picturesque places of the famous lake.
Transfer to the hotel
Day 14
Baikal

Breakfast at the hotel
Walking tour of Listvyanka
With cheerful wooden cabins spread out across three lakeside valleys, this is the most popular of Baikal's villages. Hike up for excellent views of the lake. Try the famous Baikal fish Omul at a restaurant located at the shore of Lake Baikal.
Banya
You cannot come to Russia and not visit banya! Throughout Russian history, all social classes within Russian society, including villagers and noble people, used it.
Create a personal handmade souvenir in the evening by joining a master – class.
Dinner (picnic)
Return to the hotel
Day 15
Baikal and Irkutsk

Breakfast at the hotel.
Check – out
Trip to a traditional Buryat village
As the first inhabitants of the Lake Baikal region in Siberia, the Buryat people are descendants of tribal Mongols whose spiritual belief system combines Buddhism and shamanism. The Buryat language is classified as endangered by UNESCO.
Be greeted by locals, go on a tour of their traditional dwellings, see a musical performance, try traditional cuisine and of course meet a shaman.
Return to Irkutsk. Visit to the local market
Transfer to the train station
Train to Vladivostok
OR
overnight flight to Vladivostok (available Wed and Sat)
Day 16
Day on the train

Located around the Golden Horn Bay, not far from Russia's borders with China and North Korea, the city is the home port of the Russian Pacific Fleet and is the largest Russian port on the Pacific coast. It's unique character is still manifested in the architecture, which merges together European and Asian worlds. You have to come to Vladivostok at least for its food scene, influenced by Korean and Chinese culinary traditions, boasts its own take on seafood delicacies including oysters, calamari, crabs and caviar.

Arrival in Vladivostok. Meeting with a guide. Transfer to a hotel. Check-in
Transfer to a local restaurant. Breakfast
City tour with a trip to Russky Island
See C-56 submarine as well as many historic, cultural and architectural landmarks. Delve into Vladivostok's military history visiting its Fortress including two of the old batteries, which now serve as museums. Russky Island was a fully militarized zone for most of the past 150 years, but it has been reinvented as a business and academic center.
Transfer to the hotel
Day 20(17)
Vladivostok
Breakfast at the hotel. Meeting with a guide. Transfer to the airport
OR
an additional day in Vladivostok
Optional: Visit Primorye Safari Park.
It gives visitors a chance to get up close to the Far East's regional wildlife. Thanks to the famous friendship of tiger Amur and goat Timur (who are unfortunately no longer friends), this safari park became even more famous than it was before.
Trans-Siberian Railway Saint Petersburg-Vladivostok 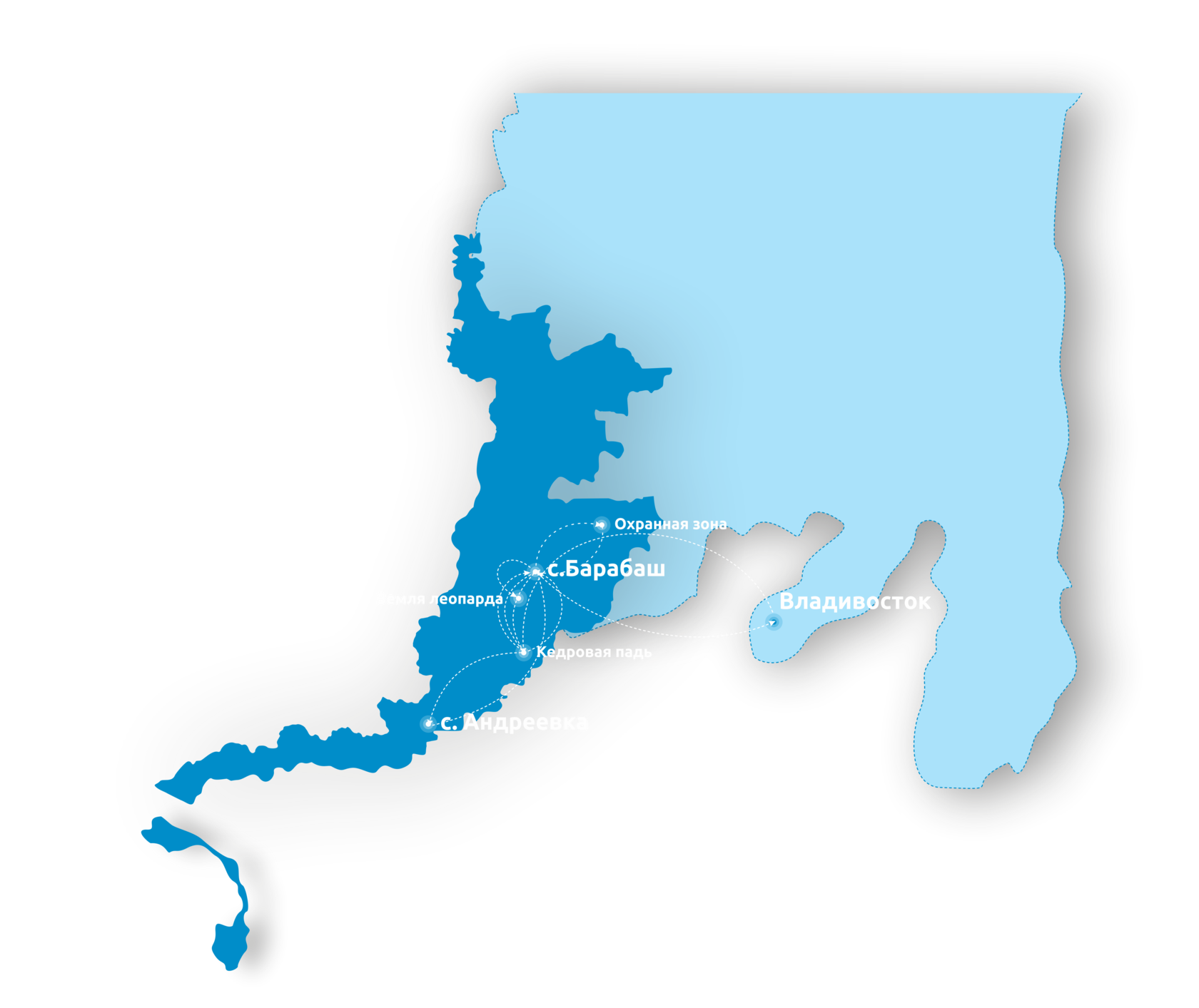